Now, babies can rock and roll. 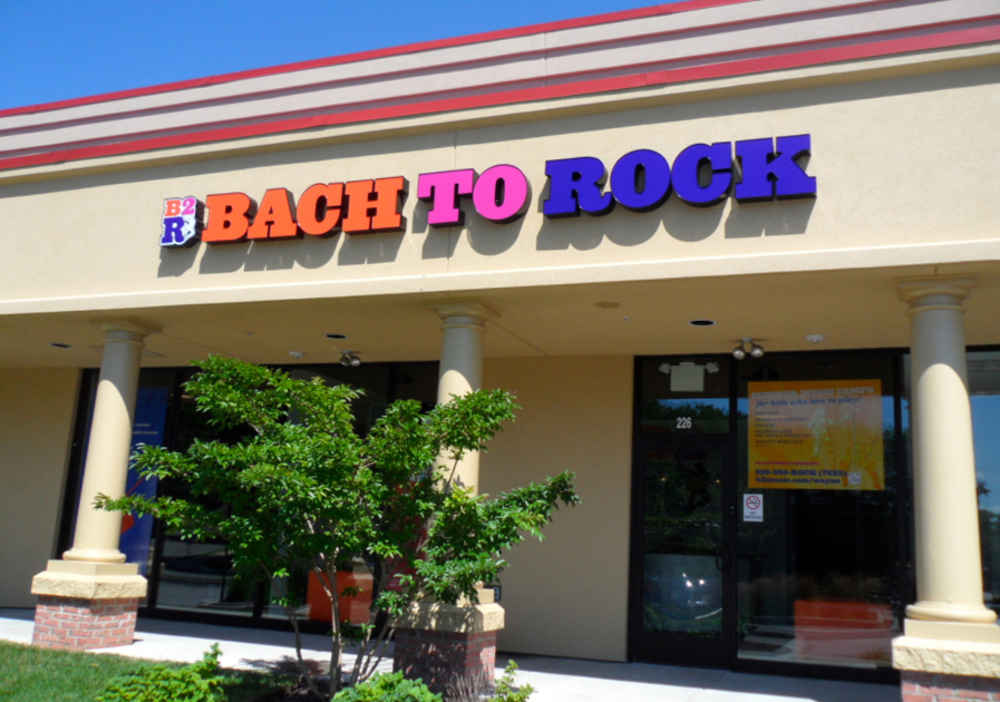 Infants to middle schoolers can get their groove on with their parents at a newly opened music school on the Main Line.

Bach to Rock, owned by husband and wife Dave Leonard and Ellen Good, opened on Monday, July 15. A franchised branch of a larger musical movement, the school is located in the newly constructed part Devon Shopping Center facing Sugartown Road. Having only gotten into their new space two weeks ago, the owners spent many late nights transforming it into a space for tunes and toddlers.

Revival of the Arts and Social Skills

At their granddaughter’s piano recital, Leonard and Good sat in the audience, appreciating the melodic sounds of little hands hitting the keys. After the event, they became interested in opening a music school of their own, researched similar concepts, stumbled upon Bach to Rock and announced the project in a November 2012 press release.

The couple recognized value in opening a music school because of the depleting arts programs at elementary and middle schools, which they view as a serious problem.

“I think one of the big things is that schools are cutting back on music and the arts” Leonard said. “It seems like at a lot of schools, kids aren’t able to take private music lessons until fourth, or even sixth, grade.”

A young mind is like a sponge, as the saying goes, and Bach to Rock seeks to take advantage of cultivating musical ability as early as a year and a half into a student’s life.

“Kids learn so quickly when they’re young, it’s kind of like learning a language,” Leonard said. “Music is basically another language.”

Additionally, the owners believe that music can build social skills, seeking to be a breeding ground for bands. As students mature in age and experience and identify with a genre, they can be split into bands if they so choose. Playing in a band encourages budding artists to assume a certain role and act as a leader, Leonard said.

“It’s like a team sport,” he said. “All kids want to experiment with different things, games and sports – Not everyone is going to be interested in a band but for those who are, we’ll provide a unique opportunity.

A Multitude of Musical Options

The school offers musical education in a variety of formats, including private lessons, group classes, structured programs and camps divided by age groups.

Programs including “Rock n Roll” (coming in the fall) will provide music and movement instruction for 18 month to 3 year olds accompanied by a parent; “Rock City” will introduce instruments to three to 5 year olds; and “Kids N Keyes” will focus on keyboard lessons for 5 to 7 year olds.

Various camps also focus on certain skills, such as a Glee Club and Rock Band camp, dependent upon age.

The owners recruited approximately 10 teachers University of the Arts and West Chester University job fairs because both schools have accredited music programs. Leonard and Good sought instructors who had the “best of both worlds,” or both a musical education and performance background.

While the school provides guitars, basses, drums and keyboards on site, the owners encourage the rental or purchase of orchestral instruments.

“Our instruments can play everything from funk to hip hop to blues, any genre including classical,” Leonard said. “Almost all teachers start out in classical training but they expand the repertoire as they get older.”

Since Bach to Rock is a franchised venue, they abide by the curriculum and use the brochures and structure of the corporate headquarters. But Good noted that the franchised affiliation does not decrease the personal aspects of the branch.

“When people think about franchises, they think of them as being impersonal. We’re the business owners and we run the school, so we’re going to know the students,” Good said.

She also noted that the tested curriculum will guarantee uniformity in learning and benefit the students.

Bach to Rock will be hosting an open house on Saturday from 10 a.m. to 2 p.m.

Read the article on Patch.