It’s not your grandma’s piano lessons. 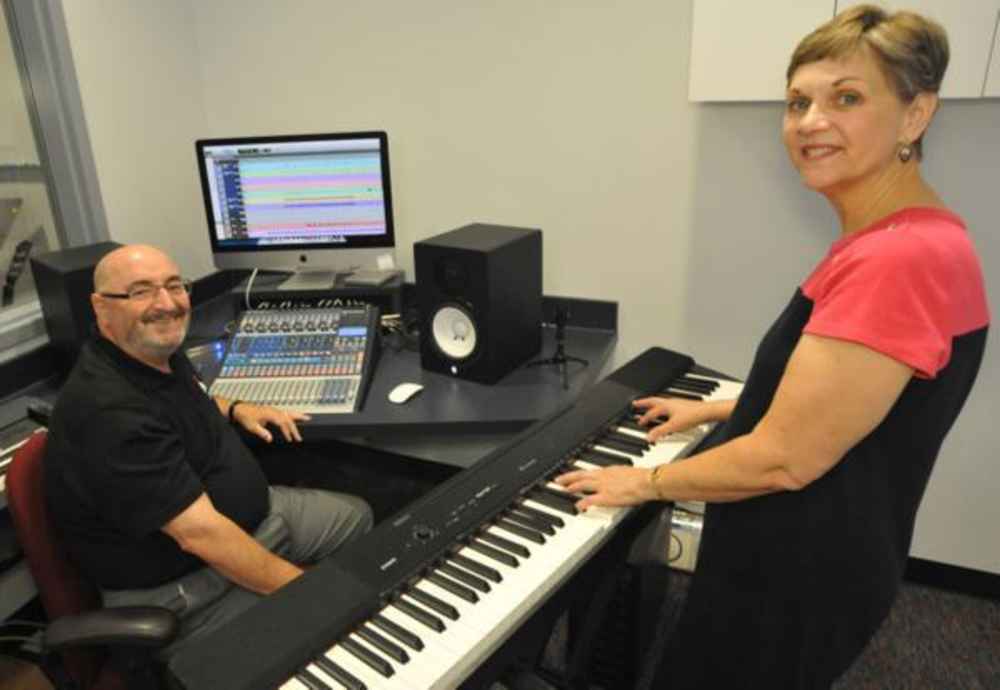 Bach to Rock in Wayne offers a new way to teach music to children, from the upbeat décor with photographs of famous musicians including Bruce Springsteen, Louis Armstrong, U2, Rush and the Beatles, to the individual and group lesson rooms and a jammin’ stage to strut their stuff, the new business will likely become a haven for aspiring musicians.

Owners Ellen Good and David Leonard got the idea to start a music school when their 8-year-old granddaughter had a piano recital. After doing some research they decided to start a Bach to Rock franchise. The corporation has eight company-owned locations in the Washington, D.C. area and one other franchise in Long Island, N.Y. Leonard and Good opened the second franchise in July, although others are in the works.

The couple had moved to Kennett Square to be nearer to family after living and owning businesses in Boston for several years.

Although neither one is a professional musician, music has always figured in their lives. Good has played piano and string bass since elementary school. She performed with the Lancaster Symphony during her high school years. Today, Good is learning to play the harp. Leonard began with trumpet lessons in the fifth grade. He played in bands in high school and moved on to guitar in college.

Getting kids into bands is one aspect of the Bach to Rock plan to keep kids interested. Too often kids begin an instrument with high hopes only to quit after finding practicing boring or too solitary, said Leonard.

“Sitting in a room alone practicing is not fun,” he said. But once they get organized into bands, playing music becomes fun. “It’s a chance to perform. It’s got to be fun. That’s the bottom line.”

Good said, “As kids get proficient, we get them into bands.”

One 10-year-old boy who has started taking lessons on saxophone told them he wants to join his school’s jazz band.

“I want to play and make some noise,” Good said, quoting the student.

A 10-year-old girl who admires singer Taylor Swift came for a birthday party. She sang one of Swift’s songs, “22,” in the recording studio, while her friends sang the back- up, said Leonard. The girl left, happy, with a CD recording of her singing, he said.

The rooms in the building have sound dampening walls and ceilings of 10 ½ feet for better acoustics. And the school includes a state-of-the-art recording studio with computerized mixer.

Bach to Rock provided a curriculum it’s developed for its schools, said Leonard. That curriculum takes kids from learning how to play an instrument, to music theory to techniques. The school has hired teachers who are students at University of the Arts and West Chester University, Leonard said.

There are also group classes where students learn to play various instruments in a group environment. Students can also take audio recording classes in the recording studio. The studio can also be rented.

The school offers a summer camp, as well.

In the Kids n Keys class, students take home a computer program that helps them practice at home between lessons, Good said.

All the young musicians are encouraged to protect their ears with ear plugs, Good said. As part of its program, Bach to Rock works with the American Speech Language Hearing Association to bring ear protection to its schools and instill in the young musicians a desire to use it.

Pam Mason, an audiologist with the association, said that any sound over 85 decibels is “potentially devastating to your hearing.”

Noise induced hearing loss is the second most common form, after age-related hearing loss, she said, and “the younger the child, the more vulnerable they are to hearing loss.”

“It’s important to let children know how to protect their hearing,” said Mason. And noise induced hearing loss it preventable, she said. Too many youngsters listen to music through headphones at levels that damage their ears, she said. The volume dial should be set at no louder than 60 percent, she said.

The higher-pitched sounds, like “S,” “F,” and “Th” disappear first, she said.

“For serious musicians, damage to hearing can jeopardize their careers,” said Mason. And for younger children, even mild hearing loss can have “huge negative consequences” in their learning, she said.

“Bach to Rock is honored to partner with ASHA to help today’s youth recognize the importance of hearing protection,” said Brian Gross, president of Bach to Rock, in a written statement. “We know that, through this collaboration, we are teaching our students how to preserve their hearing for the future.”