Nik is Taking Music Lessons to a New Level 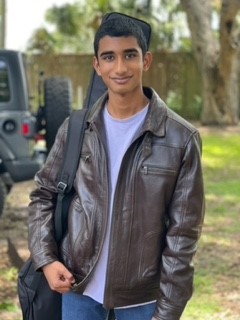 Nik’s musical journey began with him taking lessons at another music school. However, his dad, Raj, noticed Nik teaching himself guitar and percussion in addition to the electric bass, so it seemed Nik was ready for the next step. Once Nik and Raj learned about the new Bach to Rock that had opened, together they decided to switch Nik to Bach to Rock.

“Nik’s interest grew immensely after joining Bach to Rock, as he delved deeply into music theory, began studying independently, and taught himself (and me) some of the information he learned,” said Raj. “The learning experience has been amazing. Nik raves about the ability of his teachers to impart knowledge on music theory and work with him to learn pieces he is interested in.”

As a parent, Raj really appreciates the warm, personable and professional staff at Bach to Rock.  “They gave feedback and suggestions for Nik that were aimed at improving his musical ability, not simply suggestions for more lessons. In fact, at one point, we were advised not to begin another of my children in band, as he was not musically ready for it. That spoke volumes to the integrity of the team, and their focus on the kids, not just business.”

Raj adds, “I would advise any parent that music is the expression of anyone’s soul. Kids often don’t know how to express themselves and their feelings, however, music provides perhaps the greatest conduit to self-expression.”

Bach to Rock excels at helping students tap into their talents and express themselves through music.  To find out more about music lessons or and programs in your area, find your closest Bach to Rock location.