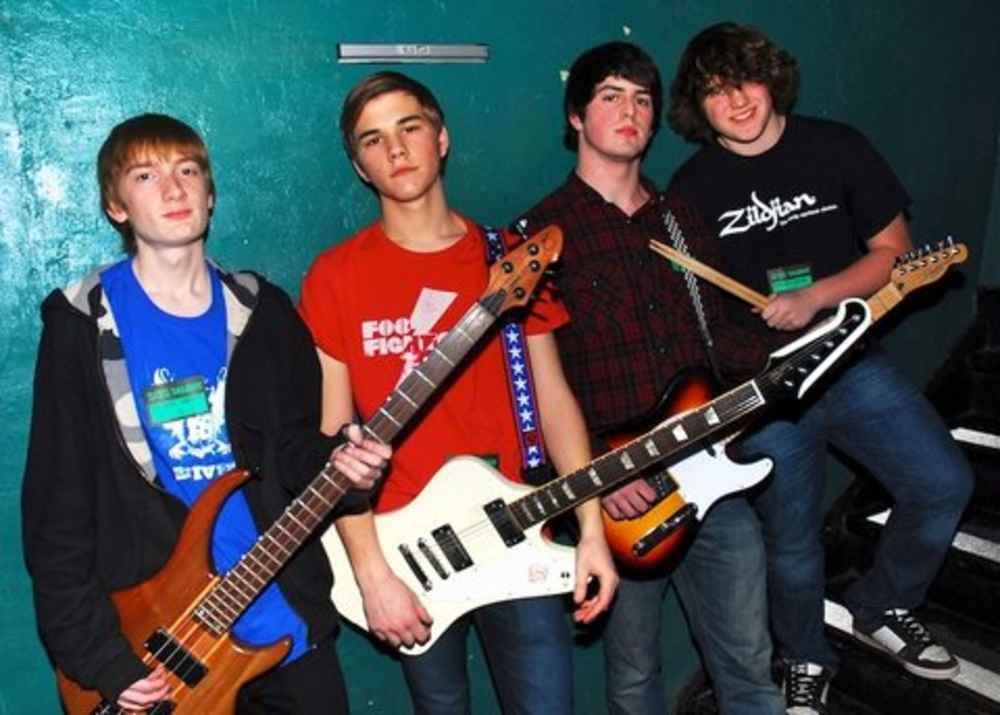 McLean, VA., Nov. 1, 2010— The National Association of Music Merchants (NAMM) has announced that local teen band, Friday Harbor, whose members attend Langley, Mclean, and Yorktown High Schools, has advanced to the online Semi-Finals round of the 2010-2011 SchoolJam USA teen battle of the bands competition.

Starting Nov. 1, Friday Harbor will be featured along with 47 other teen bands from across the United States at www.schooljamusa.com, where people from the general public are encouraged to vote daily for their favorite band. Online voting will run through Nov. 30, and 10 finalist bands will be announced Dec. 5.

The nationwide contest, sponsored by NAMM, is designed to encourage teen bands across the United States to demonstrate their musical talents and enjoy the many proven benefits of making music.

If Friday Harbor is voted as one of the 10 finalists, it will be invited to perform live along with nine other band finalists at the SchoolJam USA Finals, held during the NAMM Show, one of the largest musical products exhibitions in the world, on Saturday, Jan. 15, 2010, in Downtown Disney located in Anaheim, Calif.

Reinforcing the competition’s mission to encourage active music making among teenagers, all of the 10 finalist bands will receive prize money to purchase new gear for their band from a local NAMM Member music products retailer of their choice, as well as additional funding for their school music programs. The winning band will also travel to Europe next year to perform at the 2011 SchoolJam Germany finals in Frankfurt.

“NAMM not only supports music education programs, but believes strongly in the passion young adults have for playing music,” said Joe Lamond, NAMM president and CEO. “As we begin our second year of this national teen band competition, we are looking forward to providing a continued outlet for young adults to showcase their talent, which we hope will inspire others to pick up an instrument and discover the many benefits of playing music.”

Friday Harbor is a melodic alternative pop punk band from the DC area. Friday Harbor became a full band in 2008, after Matt and Seth (guitarists) joined the already existing partnership of Nick (drums) and Jack (bass). By 2010 the band had 3 songs recorded; “I’m No Hero”, “If You Go”, and “See Ya When I See Ya,” all of which are available on iTunes. The band is currently in the process of perfecting their unrecorded works, and building off of ongoing musical concepts. Friday Harbor is now performing regularly in local Washington DC area venues.

SchoolJam USA is also hosting a Field Reporter Contest. Are you a fantastic teen field reporter and want to attend the SchoolJam USA finals in Anaheim, Calif. and display your journalistic talents? Find out more information and enter the competition Nov. 1 – Nov. 30, 2010 at www.schooljamusa.com.

SchoolJam is an established music initiative, originally developed by MusikMedia Germany to promote popular and rock music in schools throughout Germany. The program has provided thousands of music-loving young adults with the opportunity to perform and network with their peers, increasing their love for playing music and encouraging them to become active musicians.

In the United States, NAMM has collaborated with MENC, Music For All and the John Lennon Educational Tour Bus to develop SchoolJam USA, following two successful years of SchoolJam Texas, produced by NAMM and the Texas Music Educators Association (TMEA) in 2007 and 2008, in conjunction with the original SchoolJam in Germany. The SchoolJam USA competition is sponsored by NAMM, the not-for-profit association of the international music products industry, and its promotional partners SchoolJam, MENC: the National Association for Music Education, Music For All, the John Lennon Educational Tour Bus and InTune Monthly magazine.

About NAMMThe National Association of Music Merchants, commonly called NAMM in reference to the organization’s popular NAMM trade shows, is the not-for-profit association that unifies, leads and strengthens the $17 billion global musical instruments and products industry. NAMM is the sponsor of the Wanna Play? campaign, a public awareness initiative designed to get more people connected with the proven benefits of playing music. For more information about Wanna Play?, please visit wannaplaymusic.com. For more information about NAMM, please visit namm.org.