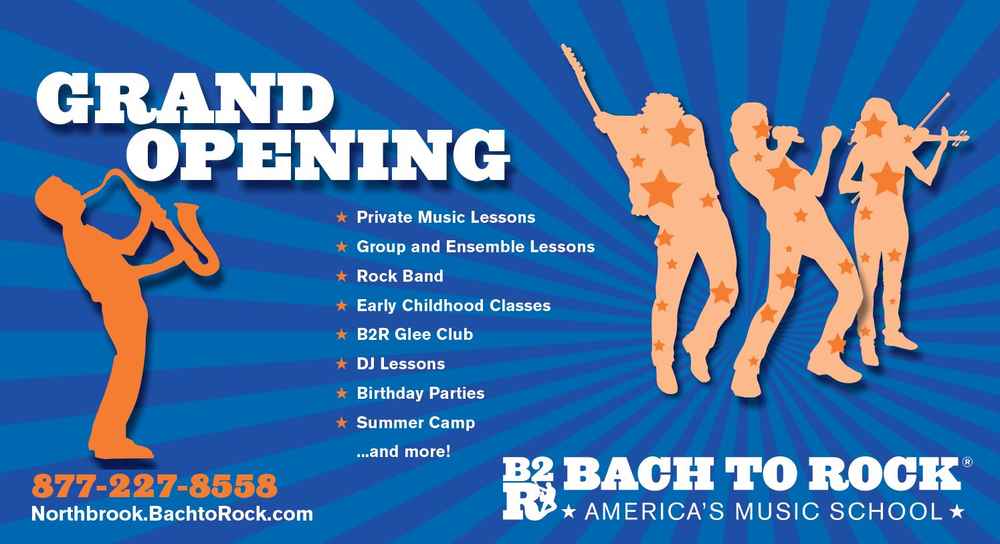 Bach to Rock (B2R), America’s music school for students of all ages, is marking its 10th anniversary with the opening of a new school on October 21, in Northbrook, Illinois, a northern Chicago suburb. Join us from 10 a.m. – 2 p.m. at 1141 Church Street, Northbrook, IL 60062, for a fun-filled musical celebration. The grand opening will showcase the specialties of Bach to Rock since its inception in 2007 – teaching students of all ages to play the music they love in a fun, nurturing, team-oriented and supportive environment.

Bach to Rock opened its first corporate school in 2007 and that Bethesda, Maryland location continues to thrive today. Bach to Rock was built on the novel idea of teaching kids popular music – tunes they could relate to and would want to learn. “With Bach to Rock, the days of solitary, boring music lessons are over. We scrap what kids hate about music classes, incorporate more of what they want, and team kids up immediately,” said President of Bach to Rock, Brian Gross. “Bach to Rock is the music school kids would have designed for themselves. They get to jam with other kids right away and play current hits,” continued Gross. The learning is the same, but the enjoyment factor is much higher.

Bach to Rock by the Numbers

In just ten years, Bach to Rock has grown into a respected and profitable franchise opportunity, with top industry rankings noted by Franchise Times, Entrepreneur and Business Week. Bach to Rock’s expansion has been robust and steady. The brand has grown from 6 corporate schools in 2012 to 30 corporate and franchised schools in 21 states by the end of 2017. Nineteen of those schools are in eight Top Ten markets, ranked by population. “We are very proud to say that we’ve reached over 35,000 children and families with our innovative approach to music instruction,” said Gross.

“A Bach to Rock franchise is a solid business opportunity for someone who is entrepreneurial, motivated and eager to help revamp music education. There is such a great need in the marketplace. Our brand has taken off because we are sustainable, profitable and we start up quickly,” continued Gross.

Bach to Rock is reshaping music education on a national scale by turning solitary, boring music lessons into a group activity that is more like a team sport. B2R focuses on providing a well-balanced music education because, ultimately, that is what parents are looking for. “Parents obviously want their child to have fun and create a relationship with their teacher, but at the end of the day they need to be learning something. Unlike other music school franchises, Bach to Rock has an extensive curriculum. Our students learn the intricacies of music — from theory to how to read music,” said Aaron Schmidt, B2R director of curriculum.

Recently, Bach to Rock launched MyB2R, an online dashboard offering customers real-time access to student progress and more. MyB2R is the only digital service of its kind in the music school industry, and provides the ability to track student advancement, schedule lessons, obtain homework and stream over 300 pre-recorded songs to practice at home.

Bach to Rock is currently seeking qualified candidates to open franchise locations in major metropolitan markets throughout the country. Bach to Rock is an opportunity for entrepreneurs to build a business that is dedicated to helping children and adults learn to play the music they love. To learn more about music school franchise ownership opportunities with Bach to Rock, as well as its veteran and franchise referral programs, contact Ralph Rillon, vice president of franchise development, at 1-855-227-7570 or franchise(at)bachtorock(dot)com, or visit bachtorockfranchise.com.

Bach to Rock is a music education school for students of all ages from early childhood through high school and beyond. B2R knows learning music should be fun and students learn best when they play music they enjoy. Weekly ensemble instruction and band formations lead to public concerts, Battle of the Bands and recording sessions in B2R’s professional recording studios. B2R builds technique, fosters teamwork and enhances self-esteem through private lessons, band instruction, and public performances.