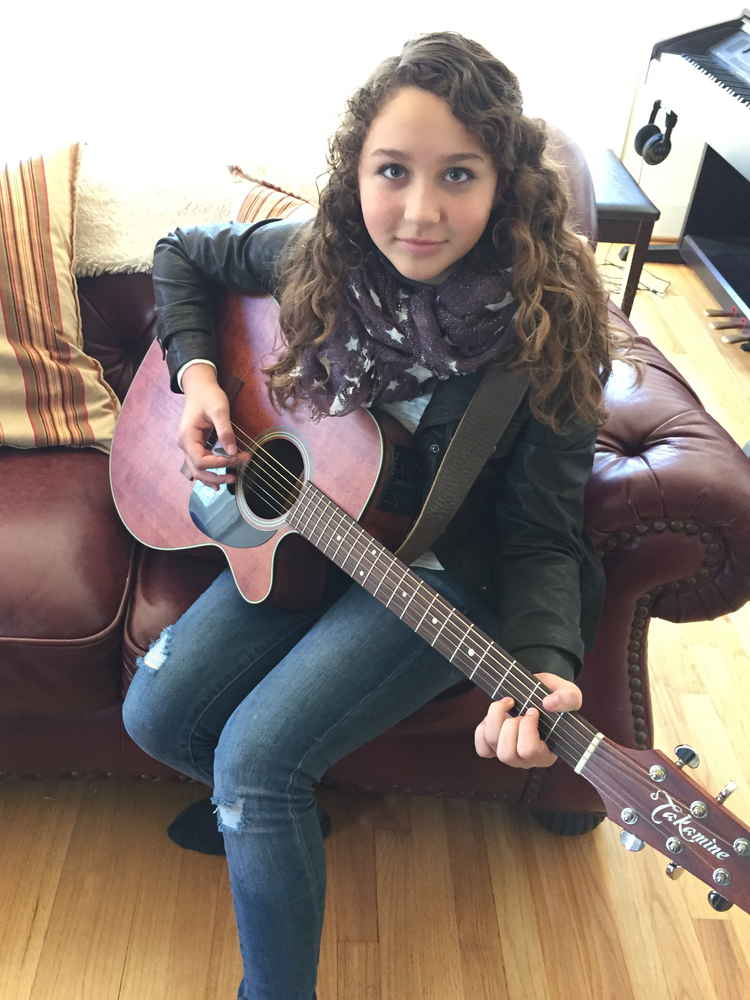 Calista Garcia, an eighth-grader at H-B Woodlawn Secondary Program, is the lead singer and guitarist for the Diamond Dolls, an all-girl rock band. She also plays piano, bass, mandolin, harmonica and has started learning the drums.

That’s all fine, of course. But her greatest achievement is that, at the tender age of 13, the Arlington resident has scored her first musical.

The student-written version of the play keeps Aristophanes’ theme of affecting change through protest, but replaces ancient adult themes with current hot-button issues, such as school reform and foreign policy. The play, which the school presented last weekend, is about youth culture rising to challenge adult authority — a reflection of the spirit of progressive change that Woodlawn embraces.

Mallan led a series of after-school workshops in September for a volunteer group of 30 eighth-graders — including Calista — who were interested in reworking the ancient script. During brainstorming sessions, Calista took note of lines that sounded particularly lyrical to use as fodder for songs.

A few weeks into the process, Mallan asked Calista if she had begun to think about putting some tunes together. In fact, she had already written and recorded most of the them, including multipart harmonies and four-piece band arrangements.

“It’s amazing what happens when you present an opportunity for students, then get out of their way and watch them rise to the occasion,” Mallan says. “So instead of Aristophanes’ satirical choral songs, we now have Calista’s brilliant, catchy, folk-pop protest tunes.”

Calista shrugs off these accolades.

“I’d just look at the script and figure out which songs needed to go where,” she says of her creative process. “First, I wrote the lyrics — I could do that in a free period without a guitar while I was thinking of a rhythm in my head. Then I’d go home and think of chords — ‘What haven’t I used yet? What riff sounds cool?’ ”

Calista recorded preliminary versions of the songs using an app on her phone. “But the iPhone 3 doesn’t have the best sound quality,” she says with a laugh.

So she brought the songs to Mark Schenker, her music coach at Bach to Rock in McLean. Schenker (a member of the 1980s rock band Kix) helped her professionally record and mix a CD of the songs from the musical. The CD is being sold as a fundraiser for Humanium, an international children’s rights organization tied to many causes that relate to the play’s themes.

Calista’s voice calls to mind a young Regina Spektor, haunting and halting, with a depth of emotion that belies her age. She lists artists such as Joni Mitchell and Billy Joel as her songwriting inspirations, but also admits that Taylor Swift and Miley Cyrus were her first musical loves.

As a writer, Calista gives voice to a generation of kids with smartphones in their pockets and iPads in their backpacks. In her song “We Stand Up,” Calista writes about youth on the verge of growing up, of how scary it is to fight for something that’s bigger than you and what it’s like to mine the depths of bravery you didn’t know you had:

I can feel it in my bones.

And we know that everything could

fall apart, but we stand up anyways.

From what was on my screen.

I’ve never cared so much,

Never been a part of something this extreme,

And we know that everything could

fall apart, but we stand up anyways.

Calista comes from a family of gifted artists. Her father taught her how to play guitar when she was 8; her mother, a lawyer who plays flute and sings, showed her how to harmonize in preschool with the aid of Barbie dolls. And the walls of her family’s home are lined with evidence of creative talent: the copious framed artwork of her three brothers — one of whom also plays trombone for the Arlington County Junior Honors Band.

When you have scored your first musical at age 13, what’s next?

Calista says she’ll finish cutting her album of ’70s and ’80s cover songs with the Dolls and “probably play some more gigs,” which aren’t easy to come by, considering most stages in the area are in bars that prohibit minors.

“I went to an open mike night at IOTA; they let me play one song but then I had to leave at 8 p.m.,” Calista says.