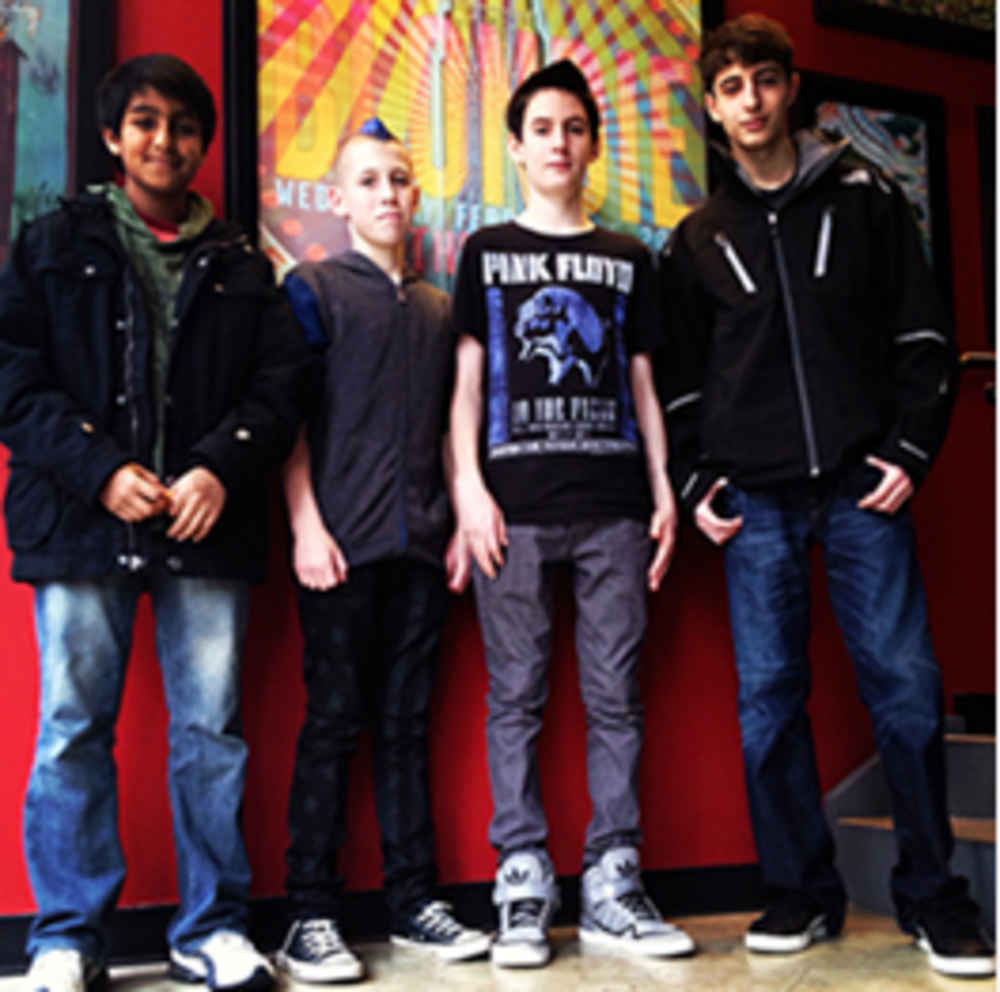 With Spring break now in the rearview mirror, most teens this time of the year start looking forward to summer. Hanging out with friends, maybe a summer vacation with the family. But not Throwing Wrenches, a teen band from Rockville, Maryland. While their peers may be planning to hang out at the local pool, these teens are planning their next set of gigs. Not only where they can play, but what songs and of course how they are going to let their fans know where to go. After all, being a performing musician is very different today than it was just 10 years ago. Yes, the times they’re a changing. The foursome met at B2R Music in Gaithersburg, Maryland where they were each taking private music lessons. Then about a year ago, they decided to form a band. And since that time the band — none of its members old enough to drive – has performed over three dozen times throughout the greater DC area including stops at the Hard Rock Cafe Washington DC, battle of the bands at both the 9:30 Club as well as the Fillmore Silver Spring and countless local community events and fundraisers. They were even selected as one of several bands to play at this year’s National Cherry Blossom Festival kickoff as well as the Rock N Roll Marathon USA, which weaved through the streets of the District. Next up for the band is a headlining slot for an all ages show at the region’s well regarded Jammin’ Java in Vienna, Virginia April 14th at 1:00pm with opening act All About Autumn. Getting the Word OutThe band uses the tools available to them. Mostly their smartphones. While each does have an email account, they don’t use email as a primary way of letting their fans know when and where their next gig will be. “None of our friends really use email that much, “ said Nick Morper the band’s 13 year-old drummer. “Instead most use Instagram. We post gig artwork to our Throwing Wrenches Instagram account all the time. That gets us huge exposure with our local fans.” “We have a Facebook Fan Page too,” mentioned, Ian Aleman the Wrenches’ 15 year-old bass player. “Some of our friends have Facebook accounts, but Facebook is really for people our parent’s age. And I guess that’s a good thing since they’re the ones that drive people to our shows.” But the band doesn’t stop there. They also have a YouTube page (youtube.com/throwingwrenchesband) and of course, an “old school” website at throwingwrenchesband.com. “Twitter is starting to be a cool way for us to let people know what’s going on with us,” mentioned, Shyaer Parvez the band’s 14 year-old vocalist and keyboard player. “We send links in our Tweets to our website or even to stuff people can download like gig posters.” With all this social media awareness, it is no wonder that the band recently broke into the top 20 Alternative bands in the DC area according to the independent music site Reverbnation.com’s “Band Equity” measurement tool, which determines a band’s popularity based on four metrics of its service. Knowing What to Play is Just as ImportantLike many bands getting started, Throwing Wrenches initially learned a lot of cover songs, now numbering close to two dozen. “We pick up songs pretty quick,” indicated Jacob Elder the band’s 15 year-old guitar player. “We learned stuff from the (Red Hot) Chili Peppers, Linkin Park, The Fall of Troy… stuff we like first. But then we realized that we needed to make sure there is something for everyone in our sets. Since most of the kids coming to our shows were brought by an adult who often sticks around, we needed to make sure there is stuff for them too. So we added some Van Halen, Rage Against The Machine and Living Colour. It’s cool to see the reaction from adults when we kill a song they knew growing up.” When asked about originals, the Wrenches were quick to mention they have several already done and hope to record several more this summer – between gigs of course. About Throwing Wrenches Throwing Wrenches is a DC area alternative / pop punk band. Influenced by greats such as the Red Hot Chili Peppers, Rage Against The Machine as well as contemporary artists like Alex Clare, Throwing Wrenches mixes the energy of pop punk with modern day rock in their original music. During live sets the foursome, all under the age of 15, also perform crowd favorites from the 80s and 90s typically with a dose of their own personality thrown in for flavor. Throwing Wrenches have entertained thousands and played many of DC’s greatest venues including the Hard Rock Cafe Washington DC, 9:30 Club, the Fillmore Silver Spring and more. For more information:throwingwrenchesband.comfacebook.com/throwingwrenchesbandinstagram.com/throwingwrenchesbandreverbnation.com/throwingwrenchesbandtwitter.com/ThrowWrenchBand