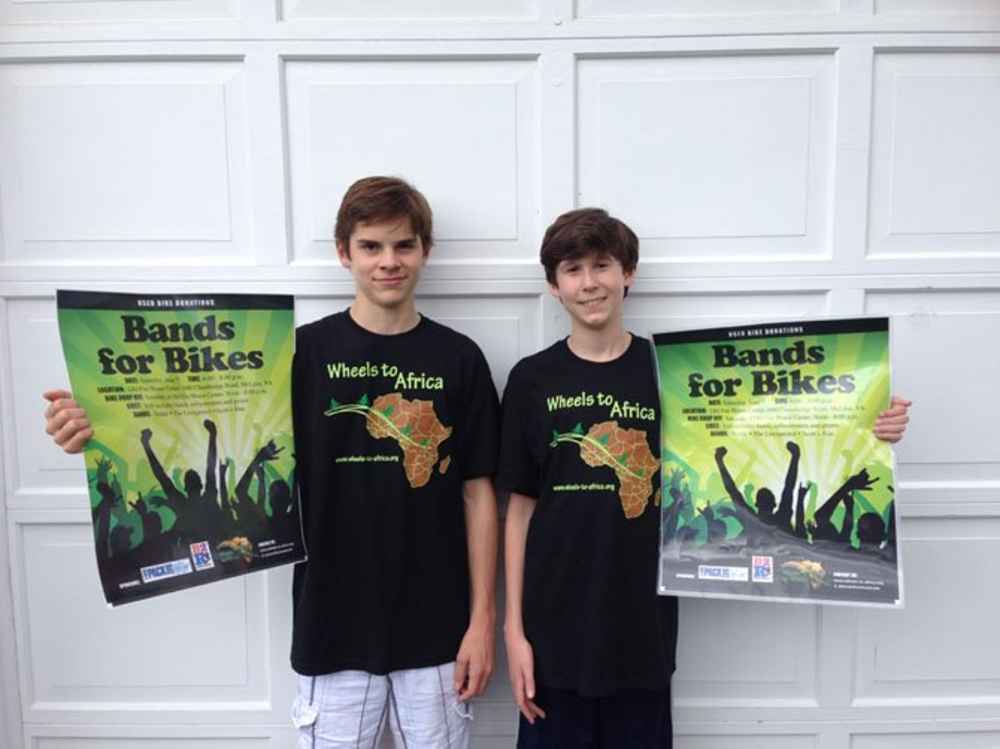 Wheels to Africa is a youth-led all volunteer 501c(3) that collects used bikes for the needy. Now a college freshman, Winston Duncan founded this organization when he was just 10 years old. During a trip to Africa with his mom, a Winston was struck by the distances children had to walk for basic needs like food and water. He decided to take action. Since 2005, over 5,000 bikes have been donated to children in African villages.

After hearing this story, long-time friends Morgan Poirier and Jack Lichtenstein, eighth graders at Cooper Middle School, teamed up to organize a benefit for Wheels to Africa. The lessons that Poirier and Lichtenstein are learning in their school Civics class also prompted them to take action and create change by affecting the lives of others. They decided that a rock concert would be a fun way for their friends and community to support Wheels to Africa. They named their concert “Bands for Bikes.” Lichtenstein, who is the drummer for two local, award-winning, teen rock bands, The Unexpected and Static, recruited his bands to perform at the event. He also called upon his older brother Alex, a college sophomore at NYU, to book his band called Scott’s Run. Poirier also recruited his siblings, Tyler, Connor and Devon to pass out and post flyers at local businesses and at their schools, Churchill Elementary and Langley.

The community has been very supportive of the boys’ efforts. Poirier asked 1-800-PACKRAT to provide storage containers for the bikes and to co-sponsor the benefit. Bach to Rock, the music school where Lichtenstein and many of these musicians study, is also a co-sponsor. So join the fun on Saturday, June 7, by donating a used bike from noon to 8 p.m. and attending the all ages, family-friendly main event: the “Bands for Bikes” rock concert from 6-8 p.m. All of these activities will be taking place at the Old Fire House Center, 1440 Chain Bridge Road, McLean.

A bike donation is not required to participate in the fun. Concert admission is $10 per person, and there will be prizes, pizza and great music. Community service is available for teens, so please volunteer or pre-register to attend at www.signupgenius.com/go/30E0A49AFAD2BA57-bands. You can also just show up at the door! For more information, please visit www.wheels-to-africa.org or email d_duncan@comcast.net or angeladjones@live.com

Read the article on The Connection.