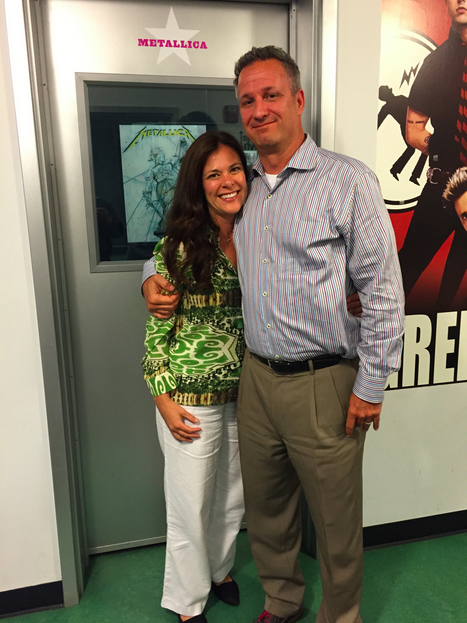 Bach to Rock (B2R), America’s music school for students of all ages, announced today it signed a multi-unit franchise agreement with new franchise partners, Wayne and Sue Chattaway, to develop two schools in Florida. This team is targeting locations in Jacksonville and has long-term goals at expanding their presence into the surrounding communities. Their first school is planned to open in January 2016.

“We are thrilled to expand Bach to Rock’s presence to the Sunshine state and we’re confident the Jacksonville area will love and benefit from our variety of music programs,” said Brian Gross, president of Bach to Rock. “With music and arts programs continuing to be cut due to diminishing school budgets, Bach to Rock helps meet the increased need for high-quality music education. We look forward to offering our fun, progressive curriculum to Jacksonville families.”

Husband and wife duo, Wayne and Sue Chattaway were inspired by Wayne’s son, Noah, to embark on a journey to find a sanctuary where he could grow his love for playing guitar. No stranger to the corporate world, this team who respectively work in the software and healthcare industries, came face to face with reality when they watched a music school-inspired movie and wondered if this film could turn into a real life dream. Upon connecting with a franchise consultant, they researched opportunities and were immediately impressed when they were introduced to Bach to Rock. The couple is thrilled to become a part of the Bach to Rock family and cannot wait to provide a musical education to children of all ages.

“My wife and I are excited to open our first business venture together, which gives children and adults in Duval County a chance to express themselves through music,” said Wayne Chattaway, Bach to Rock franchisee. “We know that Bach to Rock provides the best curriculum to help children, like my 11-year old son Noah, advance their talents in the right direction and will be a great outlet to learn music as programs in schools are continually being cut while having fun at the same time.”

Bach to Rock franchisees are provided with an array of tools to position them for success including extensive hands-on training, marketing and public relations support and a proprietary web-based management system, among other tools. Franchisees also benefit from multiple revenue streams such as individual and group classes, early childhood education programs, state-of-the-art recording studios, summer and winter camps, birthday parties and more.

Bach to Rock is currently seeking qualified candidates to open franchise locations in markets across the country. Individuals seeking to own and operate a Bach to Rock should posses a minimum net worth of $500,000 and liquid assets of at least $100,000. While music experience or ability is not necessary, candidates should have a passion for music and be able to build a strong team of committed musicians to ensure the school’s success. Franchisees can expect their initial investment to range from approximately $370,000 to $522,500, including a $35,000 franchise fee.

Bach to Rock has repeatedly been named to Entrepreneur’s Franchise 500 and, in 2014, was named one of the fastest-growing private companies in America for the third consecutive year by Inc. magazine. Bach to Rock also is ranked as one of Franchise Times‘ 500 Powerhouse Brands and on its Next 300 Franchise System list. In addition, Washington Family Magazine named Bach to Rock to its “Best for Families” list and readers of Northern Virginia Magazine voted the company as one of the “Best of NoVa.” Bach to Rock also was named the number one company to watch by the Washington Business Journal.

To learn more about music school franchise ownership opportunities with Bach to Rock, as well as its veteran and franchise referral programs, contact Ralph Rillon, vice president of franchise development, at 1-855-227-7570 or franchise@bachtorock.com, or visit www.bachtorockfranchise.com.

About Bach to RockBach to Rock (B2R) is a music education school for students of all ages from early childhood through high school and beyond. B2R knows learning music should be fun and students learn best when they play music they enjoy. Weekly ensemble instruction and band formations lead to public concerts, Battle of the Bands and recording sessions in B2R’s professional recording studios. B2R builds technique, fosters teamwork and enhances self-esteem through private lessons, band instruction, and public performances. Bach to Rock opened its first corporate-owned location in 2007 in Bethesda, Md., and has since grown to six corporate schools — two in Maryland and four in Virginia. There are four franchise-owned schools in Port Washington, N.Y., Wayne, Pa., Folsom, Calif., and Mamaroneck, N.Y. Six franchised schools are in development in Massachusetts, California, Texas, Florida and Virginia with a total of 30 schools sold nationwide. Follow B2R on Facebook at www.facebook.com/BachtoRock and on Twitter at www.twitter.com/BachtoRock. For more information, visit www.bachtorock.com or call 1-877- 227-8558.